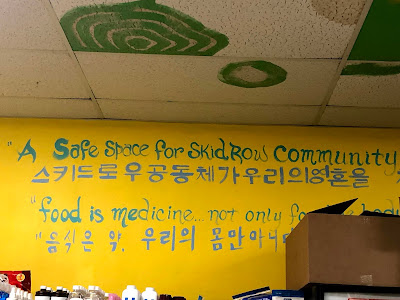 Medicine for the Soul, out of Seoul

Lately, the focus has been on healing.  So much trauma is being experienced at both the individual and the collective levels.  The pandemic is the "meta-driver" of the misery we are seeing.  Not far behind, are the effects of climate change and impacts such as wildfires in California, heatwaves in the Pacific Northwest (PNW), and floods in the southwest.  And not far behind the climate effects and worldwide health threats, human-made conflicts over social inequity - which, in turn, translates into lack of affordable housing, barriers to health care, and racial conflict.  And yet, hope and faith and care for fellow human beings surfaces.

Across all of the tragedy and distrust, there are sources of inspiration that keep the energy of hope and faith and humanity pushing through the myriad ways that tempt a person to be discouraged.

There is a blessing in living in a place like Los Angeles.  Here, we have it all.  Not only is this a place of enormous wealth, it is also a place of deeply disturbing poverty.  With more than 63,000 people who are un-housed, the fact remains that more people migrate to this state than leave.  Southern California, in particular, with warmer weather and more forgiving winters, makes for a sensible destination for those who do not have hopes of finding shelter as the season changes.

Because southern California is also a place where the fact of migration is by land, sea, and air the generations are also present - first, second, third, and fourth generation California residents can be found in every racial and ethnic group.  This makes for a kind of complexity that naturally creates challenges for community organizing directed at increasing societal equity and inclusion.

So what is a person to do?  The answer is always the same:  discover who you are.  And be that human being.  Whether it is musician, athlete, artist, teacher, healer, all are students of life.

Bearing witness to magic, and miracles is a favorite pastime.  It happens on a daily basis in Los Angeles.  And on Skid Row, where the unhoused gather there is a spot that manifests hope.  The little market that has been there for over two and a half decades provides sustenance - literally and figuratively.  It is a market that is operated by an immigrant family from another part of the world, who traveled to this location in a time when the factors that pushed the need for migration were equally compelling, and as always, the opening to gain a foothold was in a place that others who were already here - ignored.  And the result?  A two-generation business, modest and committed to the community it serves.  This is the language of survival and recognition.  While one is definitely an economic interest, there is recognition that both can survive only if they truly see each other - as human beings.  The Skid Row People's Market that sits on 5th and San Pedro is a tiny island of shared story-telling, mutual support, and common interests.  Its second generation owner, along with other family members and locally hired staff, are facing one of the hardest realities of the city:  homelessness.  And in that reality, they are making a difference.  That difference may not make the headlines of any national news media or social media - but it is real.

Like so many things that are not raised up for all to see - the fact of this place is a clear example of magic and miracles.  For two generations, through fires, unrest, violence, neglect - spirit keeps moving and revealing the fact that heart matters.  Food is medicine.  And that medicine feeds not just the body, but the soul.  It is not a coincidence -- that the English words, soul and Seoul sound the same -- and that is yet another example of how deeply we are all connected.