Gift of Compassion and the Migration Support Project 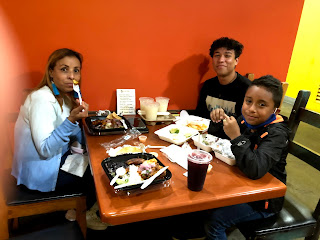 A family that has travelled far, from Honduras to Mexico to California - in search of security and safety from violence:  a mother and her boys reach Los Angeles at last.  They await the asylum hearing that was initially sought some 18 months ago.

The world of human migration has changed so much since the phenomenon was first identified as part of the factors changing the health of the entire planet.  While climate change has created concerns about the destruction of the natural world in which we live;  human decisions have created another kind of destruction.  That is, the loss of "home" due to threats of violence and the taking of human lives - even of children, in some parts of our planet.  The migration of human beings is being driven out of necessity, not just a desire for what has historically been referred to as "a pursuit of the American dream.".

The Migrant Support Project began as a piece of work to sustain a small church in a very poor valley known as Scorpion Canyon.  And it has become the temporary home of 200-300 refugees seeking respite from terrorism, drought, starvation from places like Haiti, Honduras, Guatemala, and Mexico.  Children are born there;  and families are separated as some decide to explore at least one person making it to safety with a plan to bring others while some give up and make different plans.

Gift of Compassion moved to compassion in action in 2019, building a way to support one pastor whose heart is infinitely open and trusting that those who arrive at his sanctuary can be cared for and given hope.  Today, the ask is to join the Gift of Compassion, and to share your generosity of spirit with people who are wanting to be contributing and productive members of a society that is changing here, and across the globe.  There is hope, no matter what else may be happening in our world today.  You can see it in the faces of those who persist, and insist that humanity still finds a way.